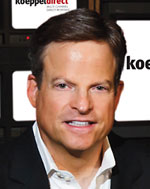 “Half the money I spend on advertising is wasted. The trouble is, I don’t know which half.” That famous and frequently referenced quote is attributed to one John Wanamaker, a Philadelphia department store owner and marketing pioneer. There’s a statue of Wanamaker outside Philly’s City Hall, a stone’s throw from the Wharton School of Business, where I set out in 1980 upon graduation to solve Mr. Wanamaker’s dilemma. As ERA celebrates its 25th Anniversary, it’s worth examining just how far we’ve come as an industry, as seen through a personal lens.

During graduate school, I interned at a leading consumer packaged goods company, where I was tasked with examining the impact of five years’ worth of campaigns. This gave me invaluable insight into all of the traditional metrics such advertisers use to gauge effectiveness, including target audience reach and frequency, impressions, retail impact, and the like. After graduation, another, similar company hired me, and I then spent time working in mainstream advertising agencies in categories such as healthcare, sporting goods, and telecommunications.

As a self-professed “numbers guy,” direct response television had great appeal. It’s easy to forget that in the early 1990s, the World Wide Web was just starting to get traction, and the beachheads of e-commerce were tiny grains of sand. Amazon didn’t launch until 1994, when ERA (then the National Infomercial Marketing Association, or NIMA) had already established its mission. Meanwhile, on television, infomercials and short-form direct marketing campaigns could be aired with dedicated toll-free numbers so that leads and sales resulting from any given airing could be measured with great precision. This allowed advertisers to optimize media campaigns by eliminating the airings that did not perform, and reinvest those dollars into the networks, stations, and airings that did deliver a solid return on investment.

But there was a problem. Traditional Madison Avenue agencies wanted to work exclusively with so-called general advertisers—that is, those focused on image. These agencies’ executives viewed direct marketing as a lower form of advertising, in spite of the fact that its results could be measured and acted upon. Instead, the focus was on creative that would win awards—as though satisfying the egos of those involved in creative took precedence over the client’s best interests.

Possessing an analytical mind, this rubbed me the wrong way. Things came to a head, literally and figuratively, when we won an account for hair restoration. The head of creative insisted that the commercial contain no before-and-after photos, feeling it would be tacky. I argued that showing such transformations was essential to the product’s success.

In 1995, I broke off to start my own agency, Koeppel Direct. Around this time, the owner of the hair-restoration business, which employed a franchise model, had a buyout offer of roughly $500,000 on the table because the business was almost bankrupt. He declined the offer, instead turning to sound DR principles and precise media attribution. We collaborated to reduce the company’s cost-per-sale by about 75 percent. Five years later, the business was sold to a private equity firm for approximately $40 million. While others were counting trophies, we were counting ROI.

Flash-forward to today, and things have come full-circle. Now that so much commerce is conducted via digital channels, the line between DRTV advertising and sales isn’t so straight. All of the aforementioned “traditional” metrics that rely on third-party data such as Nielsen ratings now come into play for direct response marketers, in addition to cost-per-lead, cost-per-sale, average lifetime value, and other yardsticks typically categorized as more “direct.”

New ways of measuring performance involving geotargeting and sophisticated algorithms are part of the evolving mix. Instead of advertisers being divided into general, image, or “impression-based” advertisers, one can argue that all advertisers are, in one way or another, direct marketers. That’s why I am thankful for the trajectory of my career—having worked on both the general and direct sides of marketing, the two worlds have now converged.

This reality requires a different skillset than the world of 1990, when ERA first launched. As I look back, I’m reminded of Robert Frost’s The Road Not Taken: “Two roads diverged in a wood, and I— / I took the one less traveled by / And that has made all the difference.”

I am grateful for the opportunities DR has provided me, and the clients who put their faith in our team. That trust that has helped us all see the forest and the trees.

Peter Koeppel is president of Koeppel Direct, a full-service media buying agency based in Dallas. He can be reached by telephone at (972)732-6110 online at [email protected], and via Twitter at twitter.com/drtvbuyer.